The State
of Carbon Credits 2022

The State
of Carbon Credits
2022

Zooming in on REDD+
Read more

Although REDD+ has the smallest number of issuing projects on the VCMs, it has the highest credit issuance in comparison to the other projects. This is followed by Wind renewables (which has 8x more projects than REDD+).

Nature-based solutions (NBS) are the biggest category of carbon credits available in the VCMs, which is why Sylvera started rating them first.
Carbon Credit Breakdown (%)

NBS can have a significant impact on helping to mitigate climate change by reducing carbon in the atmosphere. In fact, they could account for 37% of mitigation efforts needed by 2030. NBS also has other benefits, which are less likely to be seen with technical solutions: tackling biodiversity (fauna and flora) loss, for example with conservation projects, and supporting local and indigenous communities. This is an essential element when assessing the co-benefits of carbon crediting projects.
The diverse nature of these projects means that credits qualify as avoidance (REDD+), removals (ARR) or both (IFM). These projects vary from protecting our forests to restoring them, all of which are vital to achieving our climate goals.
Nature-based solutions

REDD+ is a type of avoidance credit that finances activities that focus on the sustainable management and conservation of at-risk mature forests. Sovereign carbon credits, or Jurisdictional Nested REDD+, are not included in the scope of this assessment.

Download the full report:
"The State of Carbon Credits 2022"

Although Sub-Saharan Africa has less than half the number of projects in comparison to South America, it has just over 40 million less credits. This is due to the deforestation rates being generally higher in Africa, because the dominant drylands forests contain less biomass than tropical biomes, meaning deforestation agents are able to clear areas faster. This, combined with the difficulty in predicting forest loss in dryland biomes, has resulted in generally inflated baselines.

Asia-Pacific (APAC) also has less than half the number of projects as Africa, but it has the same market share with just over 500,000 more credits. This is due to the type and location of the projects. Several projects are situated in peatlands, which are very carbon-dense, and are also APD projects, which have more inflated baselines.
Sylvera Insights

There is a misconception that all REDD+ projects are low quality. This is not true. Almost a third (31%) of the credits that Sylvera has rated are considered high quality, with strong scores across the core pillars of carbon performance, additionality and permanence. As a result, these projects are considered low risk.

These Tier 1 projects have issued 143,452,424 carbon credits. If all of these high quality REDD+ credits were purchased and retired, it would be equivalent to 143 million tons of CO2e being offset. 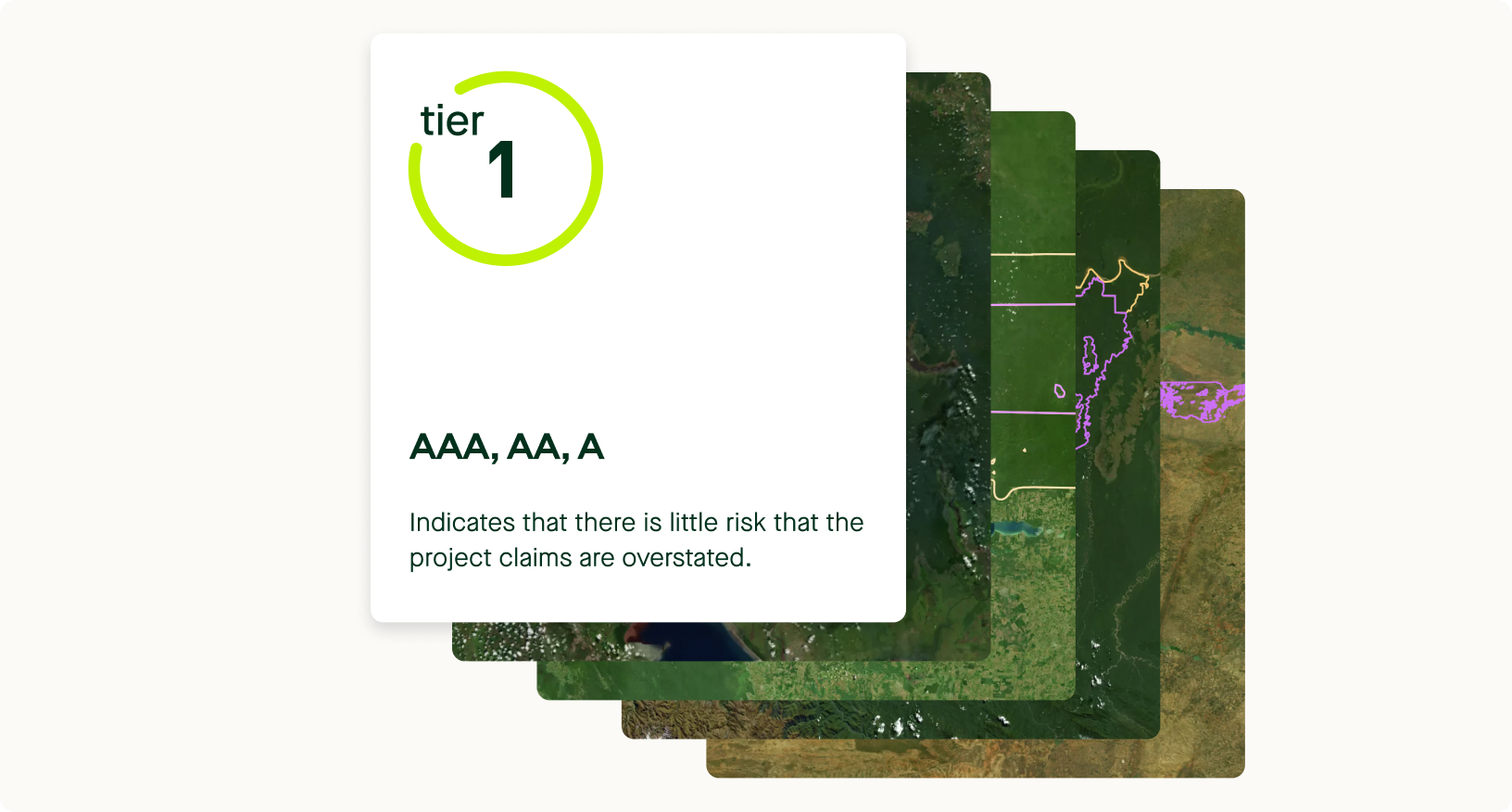 The remaining ⅔ of the projects we’ve rated are mixed quality.

About a quarter of the projects we’ve rated are considered very low quality, and consequently, high risk. The lowest rated REDD+ projects have red flags in one or more areas.
The top-rated projects are characterized by conservative baselines, accurate deforestation reporting, strong evidence that the project implements activities above the business-as-usual scenario, and minimal permanence risks.

The majority of D rated projects have grossly under-reported the deforestation in the project area and have exceeded the baseline emissions. In one other extreme scenario, a project terminated carbon project activities in favor of legally deforesting the project area for agricultural production. In these cases, one carbon credit cannot be used to offset one ton of carbon. Red flags in additionality are also drivers for projects receiving low ratings. Additionality risks can manifest in an over-estimation of the project’s baseline emissions, as well as the additionality activities.
Tab 1
Fund activities to reduce GHG emissions, for example protecting a forest from deforestation, or improving renewable energy generation on the grid.
Tab 2
We don't sell carbon credits, and we aren’t paid by developers to rate carbon projects.This means we avoid conflicts of interest, and you can trust that our ratings and reports are unbiased.

These projects have in common strong co-benefits scores. It is important to note that not all carbon projects deliver comparable co-benefits. The Sylvera co-benefits score is project-specific and assesses both community benefits and biodiversity, enabling buyers to compare co-benefits impact between projects. Sylvera measures community co-benefits using the UN’s Sustainable Development Goals. When assessing biodiversity impacts, Sylvera evaluates species richness, regional threats to biodiversity, and project actions to reduce pressure on biodiversity. We leverage a variety of data sources, including data through our partnership with the Integrated Biodiversity Assessment Tool (IBAT).
For all the REDD+ projects Sylvera has rated, the top 3 Sustainable Development Goals are

The Carbon Storage Capacity of Trees

Sylvera has been laser scanning forests in an effort to build the world’s largest dataset of carbon stored in trees. By collecting vast quantities of 3D data around the world in different biomes, Sylvera can estimate both biomass and carbon stocks for forests at an unprecedented accuracy using satellite data. 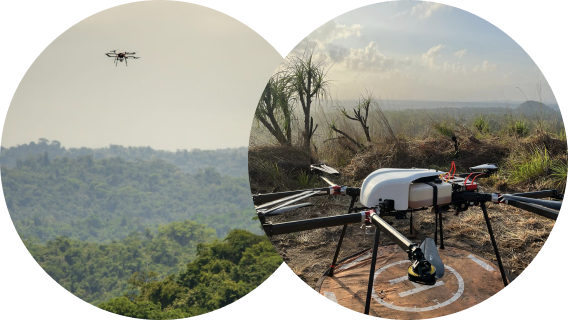 Our data collection begins with our field teams who travel to an array of forest types to laser scan (also known as using LiDAR) the ground and the top of the forest canopy using state-of-the-art drones. 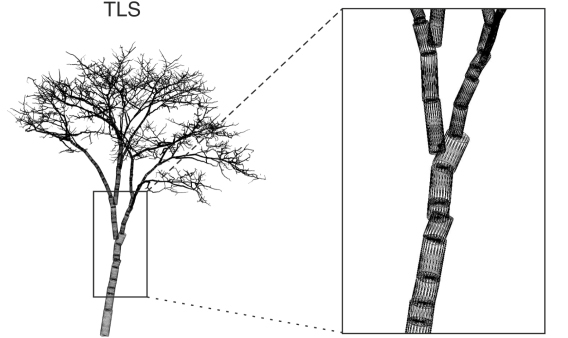 The resulting 3D scans of the forest are processed into ultra-accurate forest biomass maps using various structural modeling and machine learning tools. These maps enable us to glean finer and more precise insights into these valuable ecosystems, which should hopefully support efforts to preserve and maintain them. 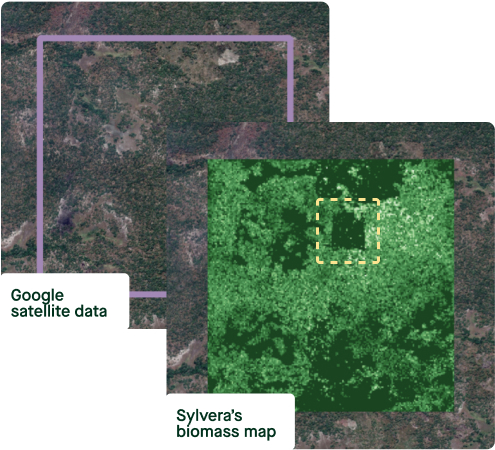 This image shows a comparison between Google satellite data (left) and Sylvera's recently collected above-ground biomass map (right) in the same area. The dark green areas indicate low biomass and light green areas indicate high biomass. Sylvera’s map highlights data that has not yet been picked up by Google satellite; for instance the map shows an area of forest that has been cleared, indicated by the dark green square. 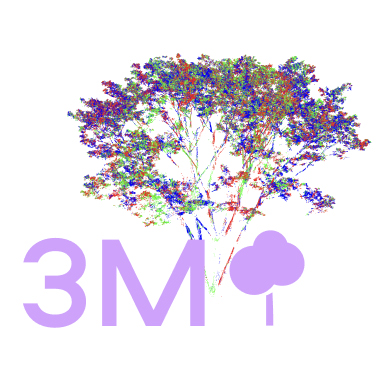 To-date, we have measured 3 million trees worldwide. There are a number of factors that determine how much carbon a tree stores. It varies across geography, species and age. In the UK, annual carbon uptake can range from around 0.9 tons in a Sycamore to 3.1 ton in an English Oak. To put this into perspective an average passenger car emits 4.6 ton of carbon per year.

It can take up to 10 years before forests start absorbing more CO2 than they emit, which is why it is crucial that we protect our existing trees, as well as restore and plant new ones. 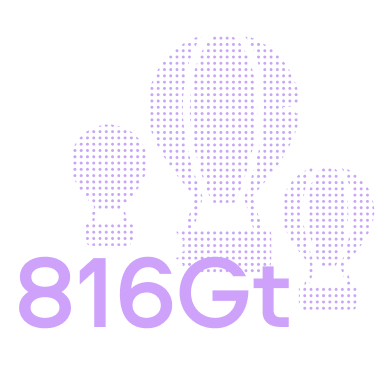 The current carbon storage of global forests is around 816 gigatons3, the equivalent to filling close to a trillion hot-air balloons with carbon.

Today, Sylvera uses our ground and drone based laser scans to train and calibrate our Earth Observation-based machine learning models to improve their accuracy.

Download the full report:
"The State of Carbon Credits 2022"