DAC 101: What you need to know about Direct Air Capture 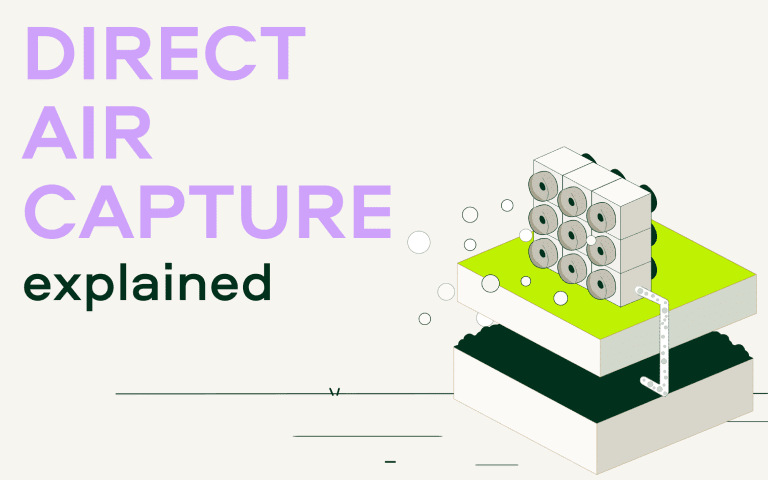 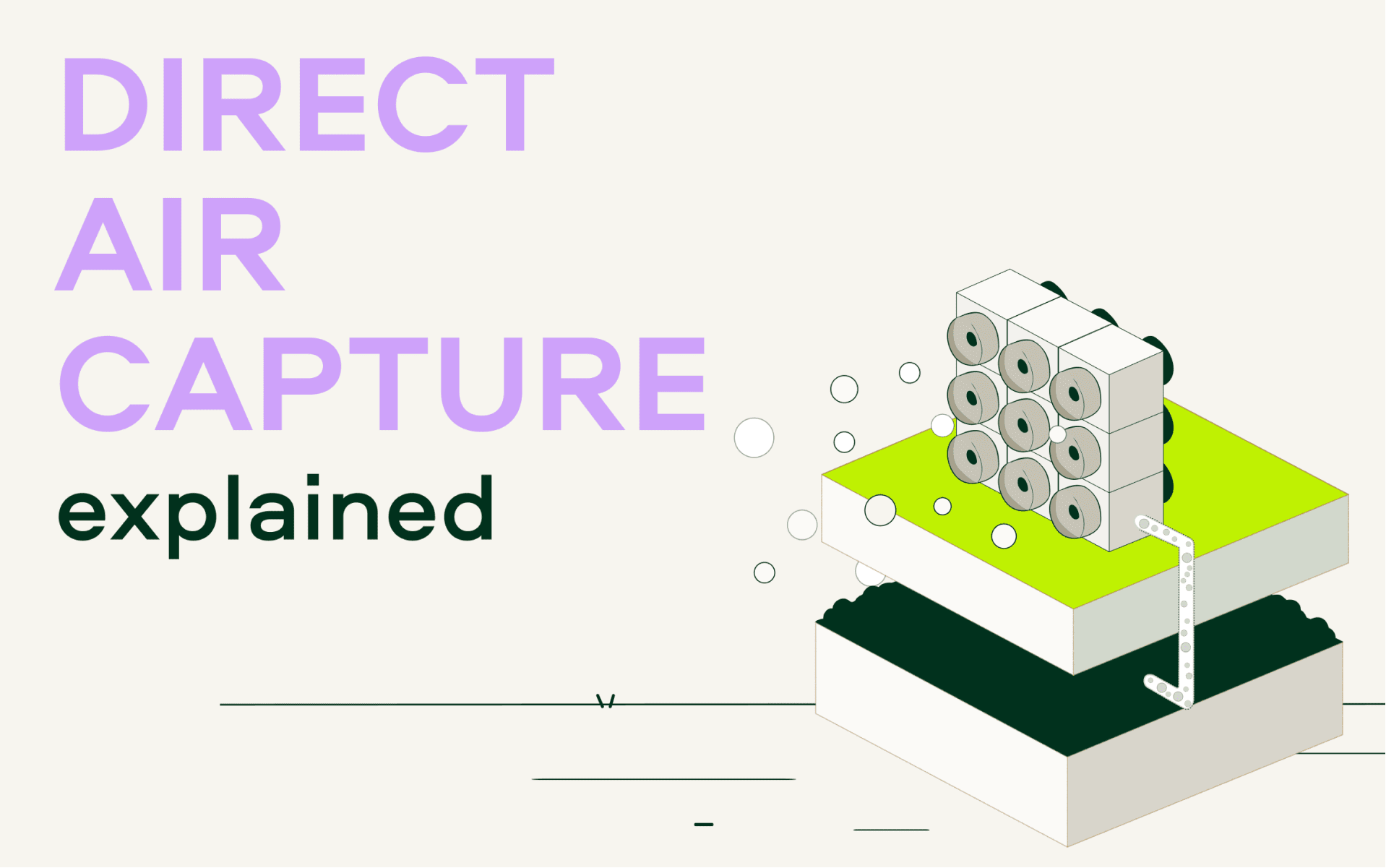 Direct air capture (DAC) or direct air carbon capture (DACC) is a method of removing carbon dioxide (CO2) from the atmosphere. Rather than attempt to stop carbon emissions reaching the atmosphere, or use natural environments (such as forests and soil) to absorb atmospheric carbon, DAC uses technology to remove the carbon we’ve already released into the atmosphere.

How does direct air capture work?

Sometimes DAC is confused with a similar technology known as carbon capture and storage (CCS). CCS occurs when carbon is captured directly from sources that produce fossil carbon dioxide (such as power plants and factory chimneys) and then stored, so as not to escape into the atmosphere. On the other hand, DAC captures carbon already in the atmosphere. CCS can help to reduce the carbon footprint of existing high-carbon activities, but DAC can actually remove carbon dioxide from the atmosphere.

What happens to captured carbon?

The carbon that is captured from DAC processes can be reused. Captured carbon has been used to manufacture fuels, make concrete building materials, and even sparkling water.

Recycled carbon is better than new carbon, but even when CO2 is recycled, it ends up back in the atmosphere. For DAC to contribute to the negative emissions needed to limit warming to 1.5 or 2°C, the CO2 captured will need to be permanently stored and not re-released into the atmosphere, which is also known as direct air carbon capture and storage (DACCS). The problem is that carbon storage at scale can be difficult, and questions about the long-term safety and permanence of carbon storage still don’t have clear answers.

Why is DAC a crucial player in the transition to net zero?

The IPCC’s 2022 report made it clear that we need valid, durable carbon dioxide removal at scale — in addition to nature-based solutions (NBS), some of which offer durable removals at scale, artificial technologies like DAC offer real potential to achieve this.

Carbon removal technologies come without some of the limitations of NBS, such as large land footprints and a vulnerability to climate change and other permanence risks. But while direct air capture could be a useful tool for stabilizing carbon levels in the atmosphere, on its own, it can’t single-handedly solve the climate crisis.

How much carbon do we need to capture?

Currently, among the 19 DAC plants in operation around the world, we capture approximately 0.01 megatons of CO2 per year. To reach net zero by 2050, the IEA believes we’ll need to scale DAC to capture more than 980 megatons of carbon dioxide a year by 2050. To get there, we’ll need significantly larger-scale deployments at significantly lower prices, which isn’t currently available. Current estimates put the cost of DAC somewhere between USD 100/ton and 1000/ton — a significant margin of error, although promising peer-reviewed research from 2018 shows that we might one day achieve capture costs between USD 94/t and USD 232/t, but in general, there is little consensus on future costs.

With those numbers, we estimate an effective and conservatively priced DAC program could cost us between 92 and 227 billion USD every year. Yes — that’s a lot of money. Investment to help DAC scale and bring down the cost is an essential part of the net zero transition. However, it is important not to lose sight of the importance of other necessary tools. For now, nature-based solutions are significantly cheaper and readily available, and for this reason they currently deliver far bigger climate impacts than DAC, which is still in early stage development and still requires much-needed investment to scale and become affordable.

How can I buy DAC credits?

Currently, opportunities for purchasing DAC carbon credits are limited and mostly future-focused. If you want to invest in direct air capture technologies, you’ll need to pre-purchase future offsets directly with the organizations working on DAC projects, or from specialized marketplaces or intermediaries. For example, both Shopify and BMO Financial Group recently pre-purchased carbon offsets from Carbon Engineering, a Canadian DAC firm, and both Microsoft and Stripe have carbon removal purchase agreements with Climeworks.

In fact, Microsoft, Stripe, and a number of prominent tech and consulting companies have formed Frontier, an advanced market commitment to accelerate carbon removal by purchasing an initial $925 million worth of permanent carbon removal between 2022-2030.

Anyone considering purchasing DAC offsets must carefully consider issues such as additionality, ensuring that their investment results in net new carbon removal, and not removal that would have occurred anyway. Because DAC offset arrangements are currently ‘future purchase agreements’, additionality can be particularly difficult to determine.

What are the opportunities and limitations of direct air capture?

What are the alternatives to direct air capture?

At Sylvera, we are strong proponents of the mitigation hierarchy: avoid, reduce, offset, remove, and using all available resources in the fight against climate change. This includes investing in new technologies and using the ones that are readily available, such as nature-based solutions (NBS) or natural climate solutions (NCS). These solutions help protect the Earth’s natural carbon sinks — forests, soil, and the ocean — and include projects such as:

Currently, these projects can help combat climate change at a much larger scale than DAC, for a fraction of the price. For more information on nature-based solutions and other types of carbon credits, download our free guide, The Sustainability Leader’s Guide to Voluntary Carbon Markets (VCMs).

Carbon removal is an enticing idea. It promises a solution to our biggest problems, and a world in which we can continue our current lifestyles at no cost to the environment. But removals alone are not enough to get us to net zero, which is why, at Sylvera, we are strong advocates for high-quality projects and funding emissions reductions as well as investing in emissions removals. Both avoidance and removals are needed if we stand a chance of achieving our 1.5°C target.

We’ve covered a lot of ground in this article, so here’s a short list of key takeaways: