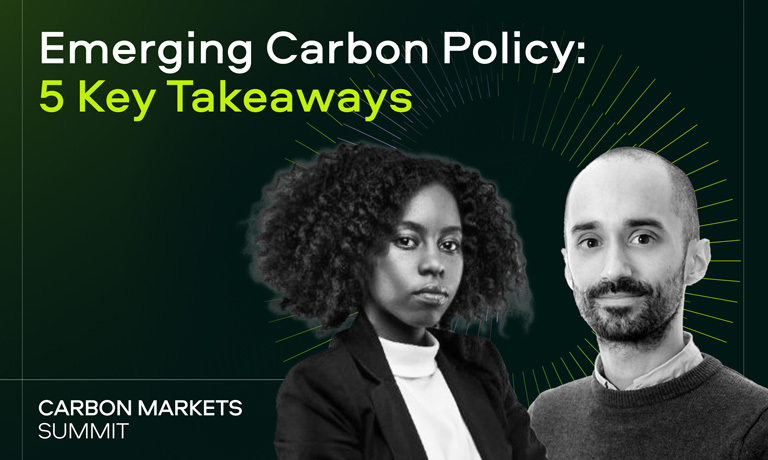 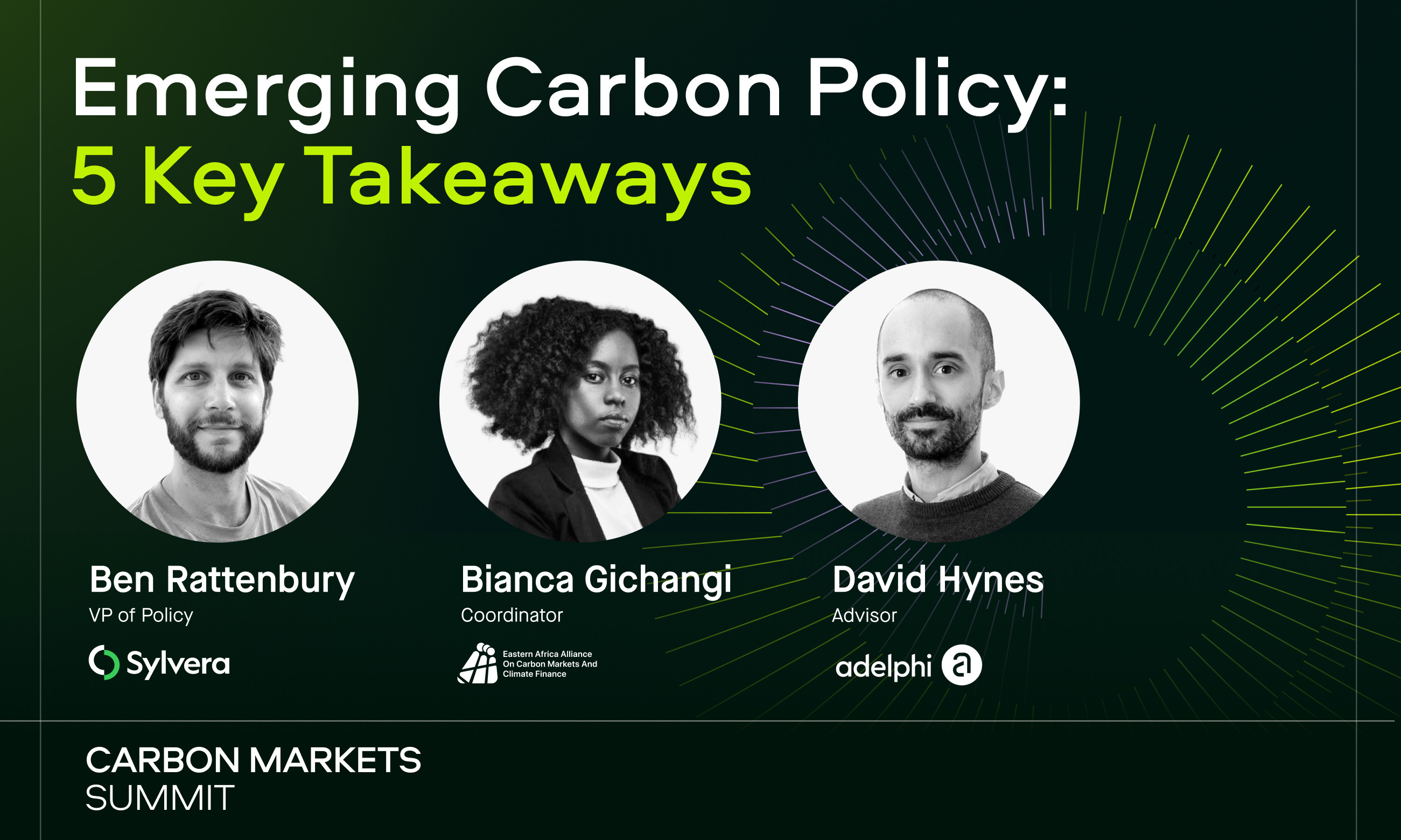 As voluntary carbon markets expand rapidly, they are increasingly coming into contact with international climate negotiations, and domestic policy and regulation. In the Policy Panel from our 2022 Carbon Markets Summit, we dove deep into the intersection between voluntary carbon markets, and the policies and regulations relating to climate change and carbon pricing. Here are our five key takeaways from this session with Ben Rattenbury (VP of Policy, Sylvera), David Hynes (Advisor, Adelphi) and Bianca Gichangi (Coordinator, Eastern Africa Alliance on Carbon Markets).

Policymakers have several concerns about VCMs, such as how different kinds of activities affect their nationally determined contributions (NDCs), how to best prevent greenwashing, how to define a carbon credit and a carbon offset, as well as more practical questions like how will the voluntary carbon market function, who operates in it, whether the claims being made are correct, and what reporting requirements should entail.

In the short term, project developers are putting pressure on policymakers in host countries. “Project developers are very conscious of transparency and credible units,” Bianca says, “so they’re seeking authorization, which would essentially be permission from the government to transfer these carbon credits internationally.” To grant this authorization credibly, policymakers need new legal frameworks to operate from.

International policy and ongoing negotiations are likely to affect VCMs in multiple ways. Historically, VCMs have expressed concern that UN negotiations would extend their mandates and begin to regulate the voluntary sphere, but this concern is misguided. Article 6 is not designed to regulate VCMs, although it’s likely that we’ll see VCMs indirectly influenced — in a positive way — by the rules and regulations set out for compliance markets.

Additionally, it won’t just be a case of compliance markets influencing voluntary markets. As David explains, “the new Article 6.4 institution was explicitly requested to review what is happening with the standards that serve the voluntary carbon markets, and to learn from their best practices. So it won’t just be a one-way street, and you would hope to see this form of informal influence between the two sections of the market.”

We’re likely to see more direct regulation and policy set by governments for markets within their countries, and this will be seen initially in reporting and transparency requirements, particularly as offset usage becomes more closely linked to net zero targets. Additionally, as more offsets are traded on public exchanges, they’ll be subject to financial market regulation, particularly in the realm of consumer protection.

3. International policymaking is slow, but the outlook is positive

For those accustomed to the fast pace of voluntary carbon markets, progress on the international front can seem frustratingly slow. But although intersessional work (such as the Bonn conference in June) rarely leads to breakthroughs, these conferences lay crucial groundwork for upcoming COPs. One notable feature of this year’s Bonn conference was widespread agreement. “For the first time in a long time I was seeing countries actually agreeing on what kind of intersessional work they can have together,” Bianca says. And in recent weeks, key personnel decisions have finally been made, allowing for progress on the underlying mechanisms for Article 6.4. “Even for the private sector, that’s very big news,” David says. “Many people will engage with this mechanism in different ways, so the quicker it can get up and running, the better for everyone.”‍

There’s a lot to be agreed on at the upcoming COP, and according to David, it’s not all glamorous. This includes developing a reporting structure, which is important given Article 6’s reliance on reporting. We should also see progress made on setting up infrastructure, such as the registry for carbon credits. “These are the two nuts and bolts parts of the system to keep an eye on at COP 27,” David says. “They’ll stay out of the limelight, but they’re important parts, nonetheless.”

5. We can expect more guidance and confidence around voluntary carbon markets in the near future

As discussions and agreements around carbon markets continue, we’ll see more legal frameworks, policies, and regulations put in place allowing host countries to develop robust pipelines for carbon offset projects contributing to their nationally determined contributions (NDCs). These legal frameworks will reduce the risk that countries and project developers are currently exposed to, which will improve confidence in project authorization, clarify ownership over emissions reductions, and help both developers and buyers of carbon offsets understand what they’re buying, and what they can say. Beyond legal frameworks, Bianca says, “you’ll definitely see more projects coming up with new models that put community benefit sharing at the center.”

Voluntary carbon markets will remain a crucial part of the conversation

Ultimately, as VCMs continue to grow, we are likely to see them work even more closely with compliance markets, and receive more and more attention in domestic and international climate discussions.